The CR2450 3v Lithium Coin Key Battery is commonly used in modern smart key fobs in BMW, Ford and other car makers. It is also used in electronics, helmets, candles and other small battery powered IOT devices. Most CR2450 batteries hold around ~600-640 mAh of charge.

When buying any batteries on Amazon you have to be careful of fake or used batteries repackaged to look new. Always check batteries with a multimeter and buy from reputable sellers on Amazon. Here’s my pick for a good, reliable CR2450 from Amazon: 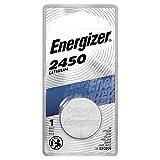 The CR2450 is used in the following car key fobs in later years: