The Honda CR-V was an early entrant in the crossover SUV market. It has used 3 different types of keys in its 15 year life. Two of the physical smart keys, and then the most modern smart key fob:

This newest smart key fob has been used in the Honda CR-V in the following years:

Here is my video on how to change the battery in the CR-V smart key:

Alright. So in this video, I'm going to show you how to change the key Fob for the Smart Key Fob for the Honda CR-V. And this is Fob used from 2016 till present. So this is a really easy one to change.

The first thing I want to do is flip it over and you can see this little knob in the back. It's got an arrow pointing down. And if we just pull this towards us like this, we can pull out the valet key like. So once you've got the valet key out, if you look in the middle of the key here, this key is kind of. If you look at it, it's got a line that goes all the way around.

This key can be popped into two pieces really easily. So if you take the valet key, insert it right in the middle and twist between the two pieces, this thing will pop right off really easy. Don't worry about breaking it. It comes apart really nicely. Inside here you've got a CR 2032 coin battery.

And there's an easy way to pop this out. Again, just take your balance like you can get right underneath that and just pop that guy out. And when you put in a new CR 2032 back in to make sure the positive side facing towards you. And there's kind of two longer tooth that holding the battery here.

So if you place those in first, it'll pop back in really easily. Now put the other side back together like this. Just pop it back together in a few spots. Put your valet key back in. That's it.

That's how you replace the CR-V battery for the Smart Key from 2016 to present.

The Honda CR-V has a tough key battery to replace. You’ll need a small screwdriver. Not like the small one you have in your toolset. You’ll need a precision set. This set is $4 on Amazon 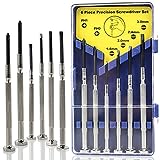 The Honda CR-V used the physical key with rectangle buttons in the following model years:

Changing the battery does take some work on this CR-V key. Here’s a youtube video I made that show exactly how to do it:

This is the battery you need for this Honda CR-V physical key with rectangle buttons:

Alright. In this video I'm going to show you how to change the key battery for a Honda CR-V. This is battery used from 2014 to present in the physical key. So if you flip the key over, you can see there's a really small screw in the back side of the key. Now to get this out, you're going to need a very small screwdriver.

So I have a precision screwdriver here set, also known as kind of like a jeweler set. I got this for $4. You can find these on Amazon. I'll link to it below the video here, but they're really handy here because you do need a very small screwdriver to get this screw out. So let me just get this out real quick.

And then if you look at the side of the key Fob, there's kind of a little notch. If you take a flat head screwdriver right into that notch and twist, I'll give you some leverage to be able to pop off the two sections of the Fob. And once you get that apart and it will come apart pretty easily. So don't worry about breaking anything there. As long as you stay in the notch and kind of twist around, you'll be good to get this part.

So now you can see we have access to the battery here. We just take our flathead and just gently pop out the CR 1623 volts coin battery. So once you have a new one of these, just make sure the positive side is facing down and push it in. Kind of keep it towards the top here when you first push it in because there's kind of some prongs down at the bottom. So just make it easier.

Once you've got that in, make sure that you don't see any positive signs or lettering facing you. You got the right side in there and then go ahead and reassemble the Fob. Just place those two pieces back together and I'll snap together real nice and easy and then go ahead and replace your little baby screw and that's it. So that's how you change the key Fob battery for Honda CR-V.

To change the battery in this key, you’ll want a precision screwdriver set $4 on Amazon since the screw is very small on the back of the key. Here’s my video showing exactly how to change this battery on this older CR-V:

This is the battery you need for this Honda CR-V physical key with rounded buttons:

In this video, I'm going to show you how to change the key battery in a Honda Civic. This is an older Fob used from 2006 to 2013 in the Civic. So the first thing I want to do is flip this over and see there's a small a screw the base of the Fob. Now to get this out, you're going to need something like a precision screwdriver set, like I've got here. You can get this for like $4 on Amazon.

And I'll link to that below the video here. So you may need to kind of dig in. And this can be a difficult screw to get out depending on your key. But I've already got this one loosened, so it'll be pretty quick. So get the screw out and then set that aside.

Now, next thing you need to do is on the base, right in the middle. There's a little notch if you can see it in the video here, but there's a notch right there. If you take a small flat head screwdriver, actually probably one of the larger ones, and put it in that notch and then just give it a twist. You'll see the base of this key starts to kind of move a little bit. And the only thing that's holding this together now is actually a little notch up here at the top.

So if you just pull from the base and then kind of pull towards you, this will come right off. Now, there's an internal piece here that we can just pull out. This contains what the battery and everything we actually need to change. You can see the buttons there. So let's go ahead and set aside our kind of shell for the time being.

Now, looking at this, there's another notch in the upper right here for kind of oriented like this where we're going to be able to separate this into two pieces. So, again, take one of your flathead screwdrivers and turn in that notch. Just give a little twist, and this will pop off pretty easily. And then we have access to the battery. So to get this battery out, we're kind of looking at it like this with those silver things and kind of the upper right there.

If you just take a little screwdriver and get underneath there, you'll be able to pop out this battery. And the battery that you need is a CR 1616 three volt coin battery. So when you put a new one back in, easiest way is to kind of get underneath this right area there and then just press it in, and that will pop into place. And it's not too difficult to kind of push in. And the prongs holding it aren't super overlapping.

Okay, so now that we've got that in, we can go ahead and reassemble this intersection, just pop everything back into place.

You kind of hear the buttons going, okay, so I've got that there. And then now we've got this to put back together into our shell. That looks good. And then when you're putting the shell back on, I think I mentioned there's a little ridge here at the top. So if you just make sure that when you put it back together, that ridge goes in first and then everything will close nicely there and then just put the screw back in and that's it.

Honda’s CR-V is a compact crossover SUV that went into production in 1995. It was introduced into the North American market in 1997.

It was available in two K24A1engines. The new engines were more powerful than the ones fitted in the first generation and offered an average of 160 HP power. The second-generation vehicles featured an i-VTEC system that offered similar fuel economy to the first generation models. The new models also featured a new suspension – MacPherson strut – front. Moreover, they featured an all-wheel drive system with a 4-speed auto transmission.

In 2004, the CR-V received a facelift that involved replacing the taillights and increasing the wheel size from 15 inches to 16 inches. It also got a new grille with an extra horizontal bar. The high and low beam featured separate bulbs. Additionally, the model had an improved 2.4 L K-series engine. The 2007 CR-V featured a navigation system with voice controls. The top speed increased to 110 mph with a 28.7 mpg combined fuel economy. The third generation also came fitted with a 5-speed auto transmission and an all-wheel drive powertrain.

The 2012 CR-V featured an all-new sheet metal exterior while the interior received some improvements. It featured a 2.4 L i-VTEC four-cylinder engine with a horsepower of 185 and a torque of 163 lb-ft that gave it more power as compared to the previous models. It also has a fuel economy of 23 mpg in city and 31 mpg on highway for the front wheel drive. The all-wheel drive offers 30 mpg non-highway and 22 mpg economy in city driving.

It featured frontal fascia that had dominant headlights. It has a flat rear floor for easy access and improved comfort for adult passengers. The fifth CR-V generation is available in five engines. There is a 1.6 L turbocharged diesel engine and a hybrid version for enhanced fuel economy. The fifth generation CR-V is available as either a 4WD or 2WD with either the 9-speed auto or 6-speed manual transmissions.