FobBattery is an independent review site that prides itself on unbiased reviews. I am not affiliated with any manufacturers and do not accept paid reviews. When you buy through my links, I may earn a commission which helps me purchase more key fobs for testing. - Scott

The Honda Pilot is one of the gold-standard SUV’s. Large. Comfy. SUV-like. The Pilot has used nearly every key fob Honda has offered since it launched in 2004. The most current smart key fob looks something like this:

This is a very quick battery to replace. It will take you just a few minutes. This is the fob used in model years:

Here’s my video showing how to quickly change the Honda Pilot key battery:

To change the battery in this key, you’ll want a precision screwdriver set $4 on Amazon since the screw is very small on the back of the key. Here’s my video showing exactly how to change this battery on the older Pilot fob: 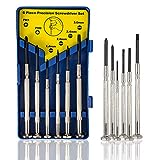 This is the battery you need for this Honda Accord physical key with rounded buttons:

The Japanese auto manufacturer introduced Honda Pilot in 2003. During the launch, the manufacturer labeled the mid-size crossover SUV as the family vehicle. This was primarily due to its three rows of seats that allow for eight passengers. The Pilot offers significant towing capacity with an all-wheel-drive model having a towing capacity of 5,000 pounds that appeals to many families.

The Pilot’s first generation was available as a 3.5 L V6 engine with a power output of 240 hp for the 2003/04 models. In 2005, the manufacturer offered the Pilot an engine upgrade that increased its horsepower to 255, and they featured variable torque management. The first generations of the vehicle were fitted with a four-wheel-drive system that locks rear differential to prevent slippage when driving at low-speed. In 2006, the manufacturer introduced a front-wheel-drive version that had a reduced power output of 244 hp. The new engine also featured the manufacturer’s variable cylinder management system that made it possible to function as a four or three-cylinder engine for improved fuel economy. The first generation vehicles featured a standard five-speed auto transmission.

The third generation was introduced in 2016, featured improved body design, and re-introduced the square shape. Exterior features for the third generation included 20-inch tires (some trim levels), daytime running lights, and LED headlights. The third generation is overall more significant than the previous models, although it is 300 pounds lighter. The base engine is a 3.5 L V6 engine that can achieve a 280 horsepower. The model also offers a new fuel economy with an estimated two miles per gallon for in city and highway driving. The models are either available with six-speed auto transmission for lower trims and nine-speed auto transmission for higher trim levels. Buyers of the Pilot have the option of purchasing an all-wheel-drive or front-wheel-drive. Safety features as standard or optional for the third generation include blind-spot monitoring, passenger-side mirror cameras, rear-cross traffic monitoring, lane departure warning system, and multi-angle backup camera. The 2019 model featured significant facelift with new infotainment and design.

FobBattery.com, is a participant in the Amazon Services LLC Associates Program, an affiliate advertising program designed to provide a means for sites to earn advertising fees by advertising and linking GeneratorGrid.com to Amazon properties including, but not limited to, amazon.com, endless.com, myhabit.com, smallparts.com, or amazonwireless.com. More details here.